Members | Sign In
Modiphius > STAR TREK: ADVENTURES
In the section on Federation Small Craft in the Command book the description of the Federation Strike Fighter mentions that it has a short endurance and needs to be carried to the battle in another ship. However the Fighter is a Scale 2 craft, meaning that only a ship with the Extensive Shuttle Bays Talent could carry it, and that ship can only accommodate two of them. given the number of fighters we see in DS9, does this mean that there is a flotilla ships just to carry pairs of fighters, or is there some form of carrier craft we haven't seen yet?
page   1
7 replies

JimJohnson said Jul 27, 2018 19:17:43
We're talking about this on the Google+ group too. I think 1) the fighters should have been Scale 1 and 2) any Fed starship should be able to carry a bunch in their shuttlebays, even though the fighters have limited warp drive capability of their own. I don't see a need for a dedicated carrier, esp given that one would be antithetical to Starfleet's purpose and the IP itself. YMMV.
Star Trek Adventures Line Editor, Living Campaign co-editor, adventure coordinator, freelance writer
www.scribeineti.com

jonrcrew said Jul 29, 2018 12:50:04
Generally I agree, fighters should be only scale 1, but officially, the FAF is 25 m long, compared to a standard shuttle's 6 m, so they are much larger. The Danube is 23 m by comparison - so it doesn't really work. (All figures from Memory Alpha.) I keep thinking that the shuttle system as written just doesn't really work for this kind of thing.

However, have you looked at Continuing Mission's Fighter Wing advantage? Rather than going into detail on numbers and scales, fighter units become an advantage that can do certain operations on behalf of the mothership, and also operate in a fashion similar to the squads in Red Alert (look for their stats on the Presidio although ISTR it's detailed elsewhere). A player's fighter could then be handled under the usual rules, since they're much more significant (the wing would be outside the operating limits of the usual rules).

Shran said Jul 30, 2018 14:46:22
Most shuttles are very sleek. Attack fighters are rather wide because they have wings (presumably to carry weapons). Also, they are not that small. Look at the studio model and the tiny cockpit. 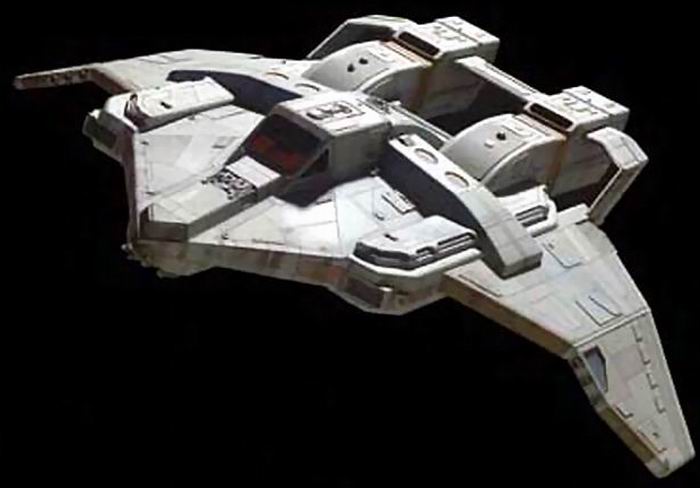 Scale 2 is OK. Sure, Danube class runabouts might be longer, but the fighter is wide. The shuttle system doesn't work for carriers. If you really want an aircraft carrier feeling with a huge flight deck, you would have to come up with an appropriate talent.

While there is no official information, the Akira class is often used as a fighter carrier. Also, I have seen deck plans for a Steamrunner class carrier ship. In any case, it does seem unlikely that each ship in the fleet can only bring two fighters. So there has to be some sort of carrier. I also don't see carriers as antithetical to Starfleet's agenda. There might be numerous occasions where large-scale shuttle operations are warranted. And in war times, you could reconfigure the shuttle carriers to fighter carriers.

Anyway, this is at least how I choose to expand my personal Star Trek universe.

TimKellogg said Aug 01, 2018 11:26:45
The Galaxy class had a very large shuttle bay. It was never seen/mor used on the show, I am sure due to production costs, but she could have carried a number of fighters, had a writer ever seen a need for them.

jonrcrew said Aug 02, 2018 08:43:48
Yeah, I think Shran or someone else posted a link to an extract of the deckplan somewhere on these boards - shuttlebay 1 was huge!

Coridan said Aug 14, 2018 04:17:55
We call them "fighters" but in reality they're more akin to Torpedo Boats than aircraft. The big difference between a fighter plane and a torpedo boat is that they operate on two different terrains (sea and air), in space there's only one terrain.

jonrcrew said Aug 14, 2018 08:47:39
@Coridan: The ones we've seen in DS9 and Discovery behave more like ground-attack aircraft. They take part in flotillas/squadrons, dodge incoming fire and make attack runs on individual ships (think Pearl Harbour or Midway). Historically, torpedo boats were used for coastal and shipping raiding, but kept out of fleet actions (as they were easily killed - which is a good argument against fighters existing in Star Trek!). The Klingon bird-of-prey is more closely related to a torpedo boat, but all small Trek ships are incredibly agile (eg the Defiant).
page   1
Back to Topics
Login below to reply:
get your own embeddable forum with talkiforum.com