Dare you unleash terrors from beyond the void by breaking asunder the second seal?

Well, in this updating and re-imagining of the classic Mutant Chronicles campaign which features the original three part adventure amongst the wilds of unexplored Venus,, plus a brand new concluding episode, Mark of the Best, you'll be able to find out!

Mutant Chronicles Venusian Apocalypse is available on Modiphius.net and DriveThruRPG.com.

Legends tells of six Seals spread throughout the solar system. Six Seals of Repulsion with which to contain the power of the Dark Soul and its minions.

Only one has ever been uncovered, with near apocalyptic results. Will the chance discovery of the Second Seal finally bring humanity to its knees?

The Venusian Apocalypse is an epic campaign that revisits and expands upon the original
material. Armour your soul and absolve your sins, for judgement is upon you!

* Four Part Campaign: The three original parts of the campaign have been updated
to Mutant Chronicles 3rd Edition. An entirely new fourth part brings the campaign to an explosive finale.

* Insidious Threats: The release of the Second Seal unleashes a new Taint upon the solar system, one which threatens to implode the very foundations of the Homebuilders.

* Venus Aflame: The repercussions of the Seal's release stretch from the depths of the Venusian Jungle to the very streets of the Bauhausian capitol of Heimburg.

* All New Pre-gens: Four new characters have been provided, with backgrounds linked to events transpiring on Venus, so that play can begin unimpeded. 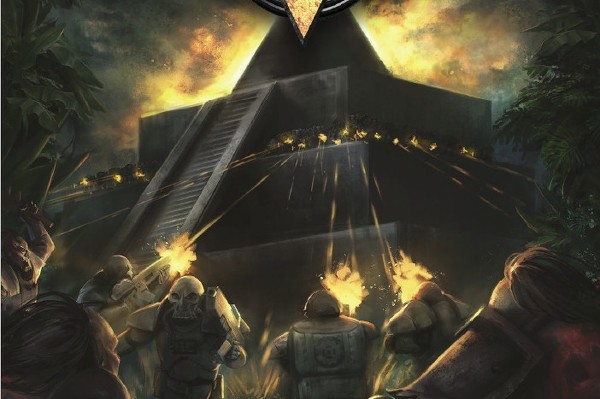 To his friend a man
a friend shall prove,
To him and the friend of his friend;
But never a man
shall friendship make
With one of his foeman's friends.
--Havamal
page   1
4 replies

Hello all so I have the Venusian Apocalypse and I have read the whole thing.
Is it just me or does it feel like the whole adventure happens in a alternate reality Venus?

Ok so my observations of the adventure in it you open the second seal of repulsion (super cool right, “yeah I opened it and”). In the adventure there is no mention of the electors or the NPC’s in this adveture detailed in the Bauhaus source book (which I have always loved that book because it so much detail on all the houses), in the adventure they mention the Renauld family er sorry “House”, but in the source book they are not mentioned.

1.)Renauld House family that first arrived to Venus but is not a major house or a great house

2.)Renauld I ( – 29 May 1040) was a French nobleman. He was the ruling count of Nevers from 1028 until his death at the battle of Seignelay against the Robert I in france (from the wikipidea page), so are they related to the ones in the adventure?

3.)They have a cool heraldry Grapes in a Cog wheel (I’m going by the picture on page 17) so does that mean they are into wine making? What is their industry

4.)They did a lot of genetic manipulation, did they ever have or still have that ability or was it even part of their agricultural aspect of their business to begin with?

5.)The Renauld House according to the adventure seems to have a lot of influence but with who? What other houses?

6.)When the character’s go back to Hiemberg they never meet any of the NPC’s detailed in the Bauhaus Sourcebook(they all got stuck in traffic on their way back to Venus)?

7.)After they defeat (if they defeat the bad guy at the end) the big baddie at the very end they only seem to get props from the Brotherhood so what would they get from Venus(this includes the great house’s) be it awards or recrimination if the players are outsiders?

8.)Who is Inquisitor Stark (random generated scary inquisitor only in this adventure) is he in the Brotherhood Sourcebook?

9.) so is anyone running the adventure yet?

I have always like the adventure and it needed a lot of work but I had difficulty trying to incorporate the reaction of all the houses and where house Renauld would end up in the adventure it seems like their input is absolutely critical to the outcome but other than one character “Jean-Louis Renauld” the rest of the family is like not there like there are only two other members.

To his friend a man
a friend shall prove,
To him and the friend of his friend;
But never a man
shall friendship make
With one of his foeman's friends.
--Havamal

BillMorton said Aug 04, 2016 18:57:09
I haven't read the whole thing but have read enough to get the general story. I plan to rework this adventure into our version of the world. This is SOP for our gaming group. We rarely take written adventures and play them straight out of the book. I'm sure many groups are that way also, nothing special here on that note.

The politics of our world more reflect the politics of World War 2. The different corporations just screamed that backdrop to us when we started playing this game way back in the day. House Renauld won't be the house that owns the land. Houses have risen and fallen in status in our game and those that have fallen will reflect their need to sell off these lands.

I've even setup up a prelude story that I've started running and will have a few other settings that'll touch on aspects of the VA. This way when we are into VA, the echoes of what they are doing or discover will hopefully make them realize they saw portents that alluded to the VA from different characters they played and connect the bigger world of MC into the VA adventure.

Doesn't really answer your questions but just a different approach on how I'm going to utilize the VA.
page   1
Back to Topics
Login below to reply:
get your own embeddable forum with talkiforum.com