Members | Sign In
Modiphius > Mutant Chronicles RPG
I seem to have some conflicting information on the Golden Lions. Some might be legacies of earlier editions (or Warzone), so I figured I'd ask here for clarifications.

1) Are the Golden Lions supposed to be a Clan Special Forces group (of Clan Murdoch), or are they supposed to be a Ministry of War force? A friend of mine tells me that Clan Murdoch has a Clan SF group called the Righteous Diadems and that the Lions are a MoW force.
2) If they are a Clan force, is membership supposed to be limited to just Clan Murdoch? I know of at least one Paladine that was a member being listed in the 3e Imperial sourcebook.
3) The 3e Imperial sourcebook says that they are media savvy and very popular (within Imperial), but I have a friend that tells me that they are (or were?) the 'bad boys' of Imperial Special Forces, and being a member is somewhat disgraceful.

I've heard that the Imperial book is the most 'sloppy' of the line, so my confusion might stem from this.

Marcin.Skupnik said Apr 08, 2016 09:13:39
First of all, the Golden Lions have been changed from what they were in the 1ed and now. Here's what Nathan wrote me when i asked about it:

The current Golden Lions that Prodos produce are these guys:
(picture on the first page of the Homebrew thread)
I was following that precedent (it's also why most factions have some form of power armour).

So, part of it is me wanting to use the newest imagery where I could (it wasn't a requirement, more a matter of preference

When in doubt just use what's in the Imperial splat, with the GLs being a famous clan Murdoch unit.
Your friend's info is total crock, never have the GLs been a disgrace and there are no Righteous Diadems (the name itself is ludicrous).

Since the Lion Claws are quite large I would say no, they can't be put away.
[Last edited Apr 08, 2016 09:14:48]
MC3 homebrewer. Check the thread!
CA-138 Deathlockdrum - when you want to put a grenade launcher on a grenade launcher, so you can launch grenades when launching grenades.

HappyDaze said Apr 08, 2016 09:56:36
I went t the Prodos page. I'm not too familiar with this company, but here's what they say under Imperial Special Forces:

The reason a clan or group of clans sponsors its own Special Force can be as mundane as guarding clan assets, as is the case of the Sterlings which protect the Imperial banking institutions of Axelthorpe-Smythe & Smythe or as a lucrative money making scheme; the Hunters of the Dunsirn can and their Iron Mastiffs provide Venusian big game hunts as team building excursions and party days out to the rich and the Brannagan clan hire out their Azure Lions as medics to anyone able to pay the price. Others, such as the Morgan’s infamous Black Berets are recognised as the best interplanetary boarding craft based anti-Legion force that has ever existed. The Paladine’s Blue Berets and the Righteous Diadems of the Murdoch clan are honorific guards for the senior members of the two powerful clans. Some battalions, such as the Laughton’s Rams, Murray’s Shamrocks and Drougan’s Wild Roses are provided by their respective clans to help defend Imperial against another corporation or the Legion. Others such as the McDonald clan’s Terror Eagles seem to be there as nothing more than a status symbol for the up and coming clan.

If the Prodos mini is the source of the current Golden Lions, then is the weapon attached to the right forearm of the suit the Plasma Enrager?

Nathan.Dowdell said Apr 08, 2016 13:48:36
I'm a rules person first and foremost, so these are potential approaches rather than official canonical answers.


Think of it as a complex political matter - the Golden Lions are traditionally Clan Murdoch, but they're no longer exclusively linked to the Clan. It's not impossible for a major, wealthy Clan to have multiple special forces units for different purposes, and Murdoch are certainly wealthy enough to count their house guard (the Righteous Diadems, per Prodos' materials) as a distinct Clan Special Forces unit to the Lions (who are elite shock troops).

2) If they are a Clan force, is membership supposed to be limited to just Clan Murdoch? I know of at least one Paladine that was a member being listed in the 3e Imperial sourcebook.


As noted above, they're traditionally Murdoch, and still largely dominated by Murdochs and affiliated families... but it's not exclusive any more.

3) The 3e Imperial sourcebook says that they are media savvy and very popular (within Imperial), but I have a friend that tells me that they are (or were?) the 'bad boys' of Imperial Special Forces, and being a member is somewhat disgraceful.


Take this as a distinction coming about because of perspective - they're "dangerous" in a way that's popular with some and regarded as unseemly by others. Imperial isn't homogenous in politics or traditions, so it's entirely feasible to have the same group regarded very differently depending on who you ask.

With regards to the material produced by Prodos, a lot of it was developed before anyone knew there'd be a new edition of Mutant Chronicles and is naturally focussed on warfare first, but the official line from Paradox is that the RPG takes precedence over the wargame in terms of background subsequently. I've personally sought to try and include ideas from several versions of Warzone where possible (some elements in the Brotherhood book are taken from Ultimate Warzone, for example, because there are certain subjects discussed there that aren't discussed anywhere else), but that's more a matter of my approach than an official stance.

If the Prodos mini is the source of the current Golden Lions, then is the weapon attached to the right forearm of the suit the Plasma Enrager?


Yes - it's the forearm-mounted weapon.


Yes. It's built for melee first and foremost, so it doesn't have the same degree of stabilisation that most forms of powered armour contain (because everyone else seems to use powered armour at least partly to carry around heavy weapons).
[Last edited Apr 08, 2016 13:50:21]
Game Development - 2D20 System
System Design - Star Trek Adventures


Thank the Cardinal!
I couldn't continue playing MC3 if the Righteous Diadems were a thing, too fabulous if you ask me.
MC3 homebrewer. Check the thread!
CA-138 Deathlockdrum - when you want to put a grenade launcher on a grenade launcher, so you can launch grenades when launching grenades.

HappyDaze said Apr 09, 2016 15:51:41
While we're talking about Imperial SF, the text for the Silent in the Cybertronic book suggests that the Rams (of Clan Loughton) are flying troops similar to the Martian Banshees. Is this correct? Should they have some sort of flight packs as part of their gear?

Marcin.Skupnik said Apr 09, 2016 16:11:58
That's a fluff problem. Why? Because there are two units called the Rams in MC/WZ universe:
The first is the clan Loughton special unit, well funded but not great.
The second is the Rams Air Cavalry, a small subgroup within the former, armed with the Barracuda (image below).

The problem? The Special Forces IC gives them the wrong type of armor (Mk. III Heavy), stats that make no sense (Pilot + Close Combat), and no Barracuda. 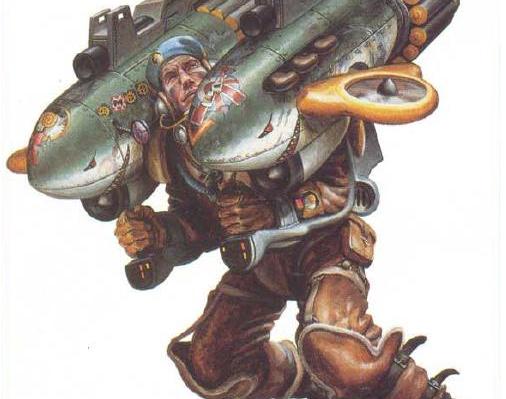 Marcin.Skupnik said Apr 11, 2016 07:48:25
I don't have a distaste for it, I'm a fan of Imperial. But there are things I would have done differently.
Right now, I just hope we will see the cut content soon and not in a few years. Even if it is just a compendium of stuff removed from the books before printing sorted by faction. Hell, make it a small kickstarter to get the cash upfront.

If anyone is interested, I've remade the Rams and the Air Cav into two separate ICs (to be found in the homebrew thread).
[Last edited Apr 11, 2016 07:49:53]
MC3 homebrewer. Check the thread!
CA-138 Deathlockdrum - when you want to put a grenade launcher on a grenade launcher, so you can launch grenades when launching grenades.
page   1
Back to Topics
Login below to reply:
get your own embeddable forum with talkiforum.com