Members | Sign In
Modiphius > Mutant Chronicles RPG
I am looking for adventure ideas and seeds to throw at my group in an upcoming campaign and was wondering what the rest of the community was up to for their games.
page   1
4 replies

Carl Matthews said Oct 09, 2015 11:28:54
First DS War. Used a map of a Traveller ship as an orbital shuttle that was bringing PCs down to Venus. My 'patron' had organised for an attempt to kill the PCs on board as a 'recruitment' test, including letting some heretics know where to find one of the PCs (enemy heretic trait). PC's survived the engineered crash with some damage (pilot wasn't prepared to buy extra D20s off me for DSPs). The hike out of Venusian jungle brought them across a Bauhaus compound that had been attacked by Dark Symmetry forces and heretics and then seeded with Mishima weapons to make it look like Mishima was responsible. The distress call was faked. Party clashed with a Necromutant and a small horde of Undead Legionaries but got away in a truck. One PC took a serious wound to his leg.

PCs were then approached by a mercenaries employed by their would-be patron and recruited as agents with plausible deniability. Patron has a grey citadel of his own and some mystic talents. PCs guessed/worked out that he had engineered their 'recruitment test' but agreed to help. Patron's story is that he is fighting his own war against dark forces. (This early, general public / most corporation workers don't believe in a Dark Symmetry enemy; all engineered by rival corporations.) One PC also wanted to inform Mishima authorities of plot to start a hot war with Bauhaus. They were give 10 Assests to spend in nearest Mishiman outpost. First mission to enter Mishiman bio-warfare lab, discover if related to Dark Symmetry and destroy if it is. (Will be using first mission from old AD&D Fate of Istus 10 mission adventure for maps and traps).

Party travelled to city and visited police station. Two power-armoured guards with chain guns at entrance. Police inspector arrogant with gaijin and low rank Mishima PCs but with evidence of faked distress call and news full of Bauhaus sabre-rattling, decide to report evidence to superiors. Players leave police station after hours of questioning but someone has leaked their presence to heretics that are trying to start the war. Drive-by gunmen try to shoot at PCs but accurate fire disables car. Before PCs can capture heretics, power-armoured guards shoot all the gunmen with chain guns. No-one left alive to question. That was end of first session.

Notes: 1) Can't seem to get my head around how reliability works. 2) I'm sure I did explosions wrong; will read up before tomorrow night's game. 3) PCs would rather fail than buy dice for DSPs off me! Don't want to include DSP generators this early as that would negate what is a valid tactical decision by players. I will have to be more cautious with my DSP spends this week. I have 5 PCs, 2 CP each for a total of 10 starting DSP.
[Last edited Oct 09, 2015 11:30:24]
UK gamer; I have more books than most game stores!

Carl Matthews said Oct 10, 2015 10:24:45
Going to flip between running AD&D Fate of Istus adventures and The Venusian Apocalypse adventures to keep the players on their toes BUT I am thinking that the Call of Cthulhu 'Day of the Beast' campaign would make a great conversion. Instead starting in the US, you start on Luna, instead of going to the Carpathian Mountains, you'd go to some Bauhuas castle on Venus, instead of Egypt, you'd be off to Mars etc., etc. Breaking Seals in MC3e and cultists trying to summon an Elder God in CoC seem like an easy mix!
UK gamer; I have more books than most game stores!

Carl Matthews said Oct 15, 2015 21:33:33
Doesn't look like there is much interest in the CoC Day of the Beast campaign conversion but here is a screen capture of one page of the NPC and Location cards I have been drafting. For anyone who cares! Lol. 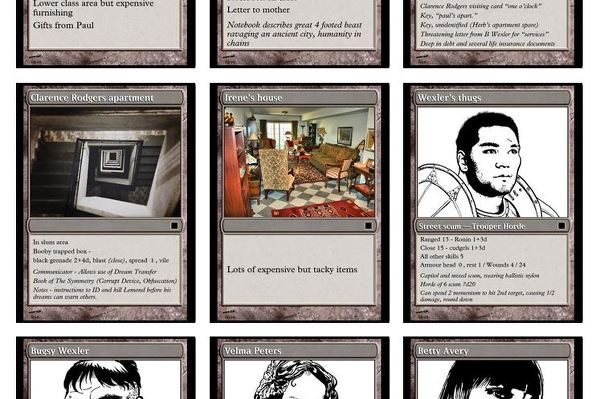 UK gamer; I have more books than most game stores!

Carl Matthews said Oct 16, 2015 12:06:53
And the cards I am using for my Fate of Istus conversion. Mishima have captured a Torn Spewer and are trying to engineer a way of spreading the disease through Bauhaus troopers using infected giant rats and devil bats. 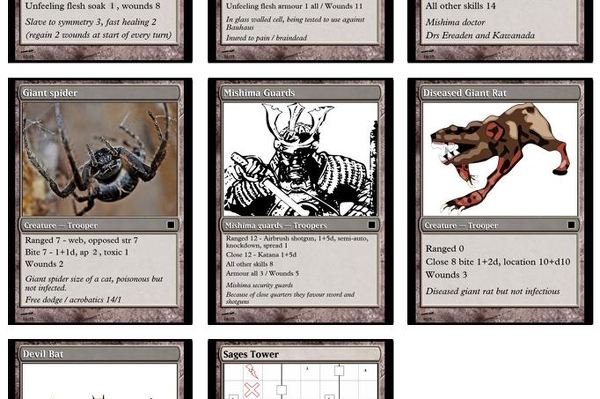 UK gamer; I have more books than most game stores!
page   1
Back to Topics
Login below to reply:
get your own embeddable forum with talkiforum.com