Members | Sign In
Modiphius > Mutant Chronicles RPG
this is the first illustration that place on your site, if you like I add more, I'd like to draw for modiphius 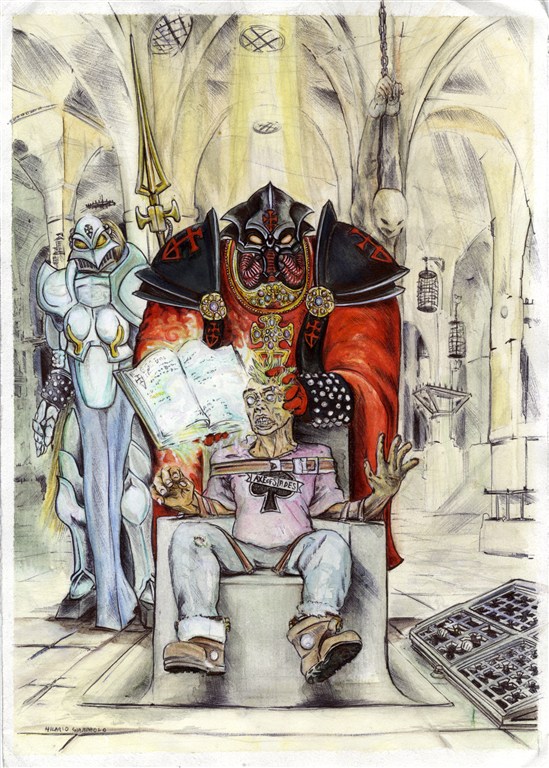 It is a good piece of art. I understand that you like the setting to be a gothic dungeon with a high ceiling and lots of pillars. The problem is that the inqusitor and heretic takes up to much space of canvas. I think you are loosing some of the mood you are trying to create. I would either darken the background making the inquisitor more imposing or make room on the canvas for a higer ceiling.

HilarioGiampaolo said Feb 17, 2014 19:45:33
right! I'm already making changes, just the background and the lights
thanks for the advice

link to image
I recommend viewing with music BOMBER motorhead !

You have been recruited as a free lancer to an imaginary section of the ISC, Section 5, if you ask around that section no one will tell you anything, because in theory that section DOES NOT EXIST!
the remuneration of the mission and very substantial and in part already been anticipated and the rest at the end of the mission ... the point is that no one has informed on what this mission! a prestigious imperial clan has financed this by including in the training program of regular troops, which, with the upper air will bear hardly refraining from punzecchiarvi with jokes. all, you have been informed that if provocherete the internal friction of the training center, you will be expelled and will not see the pay substantial, and the soldiers will be deleted from the regular army. In recent months, you have accepted the pay of regular and you have been trained for the mission, but this mission and what? increases in skill due to training are

weapons on board
on the hull next to the pilot, co-pilot has to choose between an ARG-17 Bauhaus DPAT or "Deuce" in the most integrated in the housing of a small mortar missile launcher

in the turret captain must choose between a LMG MK. XXIII "DESTROYER" or an SR MK. XII "Assailant"

fixed in the side turrets 2 LMG MK. XXIII "DESTROYER"

plus there are 2 other LMG MK. XXIII "DESTROYER" reserve in case you need to replace an equipped no longer functioning or to repair
other equipment and equipment on the vehicle for the mission are written in the drawings ...


the mission that they will be "shown" to the last moment will explain that the goal is far from the landing area, away from where it directs the bulk of the troops that will attract all the attention of the defense forces Capitol that will come just from behind railroad trasmarziana on Mars! players will realize that they direct on mars just before landing (with long-range anti-aircraft that are felt amidst the rumble of the engine of the spacecraft) and that the building that need to reach it's probably a secret research facility the Cybertronics (hypothesis later confirmed by the equipment found abandoned in the interior of the complex, weapons and equipment Cybertronics), a mission that hides another mission, the attack to throw off the imperial Capitolian, establish an outpost near their territory and occupy a laboratory the Cybertronics and shield them as much information on the research they were doing ...

the thing ... and that no one may suspect that the Cibertronyc was studying military instruments of Demnogonis weeds that have attracted the attention and wherever we war and devastation there Algeroth, when the players arrive on site will notice that the structure and if it was completely for the most part covered with a species fortification like a small medieval citadel collapsed on itself in obvious conflict with itself (Algerot / Demnogonis / Cybertronics) the necrotecnologia does not seem to have affected the structure in too compromising, the players probably break radio silence indicating that the laboratory was occupied by the dark forces of evil in the hope of being told to go back and abandon the mission, instead they will be notified (to the captain that uses the radio tower) and continue to get the same and retrieve the information, but will not be the only doctors "Curator" of Demnogonis are looking for the same thing and those who were scientists have been turned into zombies and legionnaires blessed .... things begin to take a strange turn about halfway to the goal, I wanted to meet them immediately or ezoghoul or razide and then a dozen random encounters in exclusion to the target, often find themselves at a crossroads if not a crossroads and must choose the best way to get there, a more obvious and straight in the middle of the desert to get to their destination the other way underground through the cracks and craters, in return they will realize that the roads will go back for even more given that notice other tunnels and galleries that before they had not noticed the chance to come out somewhere in some parts of the map, as far as the imperial obviously not be able to conquer the trasmarziana but will be limited only in minor skirmishes between airlines a trench and the other involving the martian bansheee and the rams Cavaly, whether imperial or less able to establish a settlement under aerial bombardment i will decide the percentage, if the news would leak out of the small town hidden the imperial would use it as an excuse to justify their actions, "we knew that from here somewhere lurked the evil one "and then joined by the bombing of the corporation, but if the news leaks out ... the corpses of clashes between impeerial capitol and mysteriously disappear .... and shortly after the imperial outpost will be overwhelmed by a horde of zombies and bestiaccie resulting in a mysterious propagation of infectious diseases, the freedom to finish the mission as the players leave, follow orders and go back to take the pay and deliver the stolen information? flee into the wilderness? escape in the territories capitol hoping to take the citizenship and escape from the imperial corp.? breaking the glass envelope that keeps the dangerous deadly weapon in a dense town?


comments, criticisms, opinions are all welcome link to image to actual size

necro bio technology in assault in the cosmic void

Shamrock said Oct 21, 2015 05:22:40
Any chance you want to take a personal request for a post-apyoc (mutant:year zero) setting? I'm looking to have some art created of my party (6 characters) for a holiday present.
Be well,

the mutant chronicles of my imagination just draw the earth seen from the sky and a logo of a corporation, on a busy street you can meet a cowboy, a pirate, a samurai, a punk who walk in the same way, in this design, however, we only pirate page   1
Back to Topics
Login below to reply:
get your own embeddable forum with talkiforum.com